When I saw this Guinness Beef Pie recipe on the Masterchef website, I simply could not take my eyes off it. I surfed around for a while more, but I kept coming back to this one and I knew I had to try it. We do not eat much beef at home these days for health reasons (less red meat for hubby), but we can certainly indulge once in a while and this was a great recipe to indulge in. 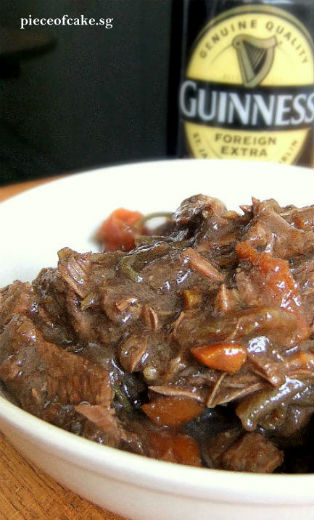 This recipe is rather time consuming – it takes about an hour on the stove and then two hours in the oven – but it is so worth the effort and time. Slow roasting the beef in the oven produces a tender beef stew rich with the flavours of caramelised onions and Guinness Stout. I left the beef stew in the refrigerator overnight it became even more flavourful! 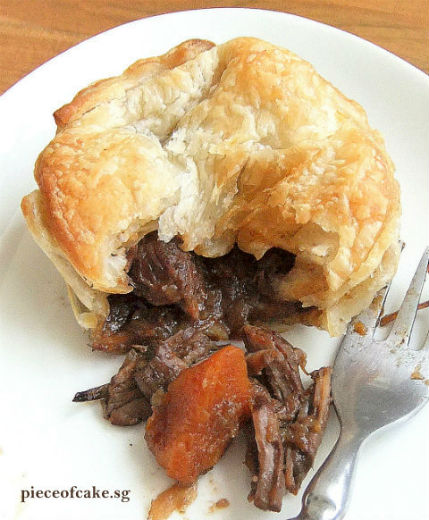 I did not make the pie crust in the recipe and used ready-made puff pastry for my pies. After waiting for so long, I could hardly bring myself to roll anymore dough. The flaky pastry went very well with the beef stew. There were some left overs which we had with rice.  I think it would also be great with bread or pasta. It was so good that I would certainly do this again whenever I want indulge. 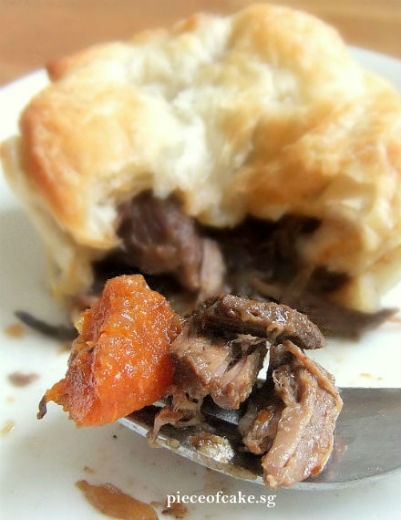 Guinness Beef and Onion Pies (6 pies)*
Adapted from recipe by Gary Mehigan for Masterchef
* According to the website, this recipe is for 6 pies. I only made half the recipe and that was enough for almost 8 small muffin-sized pies. I think the full recipe would fill at least 16 pies.
Ingredients
Beef and Onion Filling
Maggie Beer’s Sour-Cream Pastry (I used ready-made puff pastry)
Method
1. Preheat the oven to 180°C fan-forced (200°C conventional).
2. For the pies, add 40ml olive oil to an enamelled cast-iron casserole, then add the onion, garlic and thyme and cook over low heat (use a simmer mat, if necessary) for 40 minutes or until the onion is soft and translucent, stirring occasionally. Increase the heat to medium-high, add bay leaves and cook until the onion is dark and caramelised. Add the flour and cook stirring often for 3-4 minutes.
3. Season the beef generously with salt flakes and ground white pepper. Heat remaining 60ml of the olive oil in a large frying pan over high heat, then cook the beef in 2 batches until well browned on all sides. Add the carrot and cook for 5-6 minutes or until golden. Add ¾ of the Guinness and cook for 5 minutes. Tip beef and Guinness into onions. Use remaining Guinness in can to deglaze the beef pan, scraping all the brown bits from the bottom, add to the onions.
4. Pour enough beef stock to cover the beef and vegetables and bring to the boil. Cover with a tight fitting lid, then transfer to the oven and cook for 2-2.5 hours or until tender. Leave to cool to room temperature. Remove the chunks of beef and carrot to a board and chop into 1cm pieces, then return them to the onion gravy. Refrigerate until cold.
5. Meanwhile, to make the sour cream pastry, place the butter and flour and a pinch of salt in the bowl of an electric mixer with a paddle or food processor, then blend until the mixture resembles large breadcrumbs. Gradually add the sour cream, mixing until the pastry just comes together. Shape into a disc, then wrap in plastic wrap then chill for at least 20 minutes.
6. Grease 6 holes of a muffin pan with a little olive oil. Roll out the pastry to 3-5mm thick, using a little extra flour for dusting. Cut out six rounds about 4cm bigger than the muffin holes for the pie bases and six rounds 2cm bigger than the muffin holes for the pie lids. Place a pie base in each hole, then press in in lightly with your fingers, and draw the pastry up the mould a little so the pastry is 1cm above the mould. Fill each hole with some of the beef mixture, brush edges with water, then top each with a pastry lid and crimp the edges to seal in the filling.
7. Brush the pastry tops with beaten egg, cut a small hole in the centre of each pie for steam to escape. Bake for 25 minutes or until pastry is golden. Remove from the oven and leave to stand for 5 minutes. Turn out and serve with tomato sauce, if desired.
Posted by Unknown at 14:35