The Linzer Torte is perhaps the most famous desserts to come out of Austria, along with Sachertorte. Made with a delicate crust of ground nuts, it is filled with raspberry preserves and topped with a lattice crust. I am not big on tarts with jam filling and thought of skipping this bake till I came across Pierre Hermé’s beautiful Chocolate Linzer Tart – which is filled with not only jam, but chocolate! 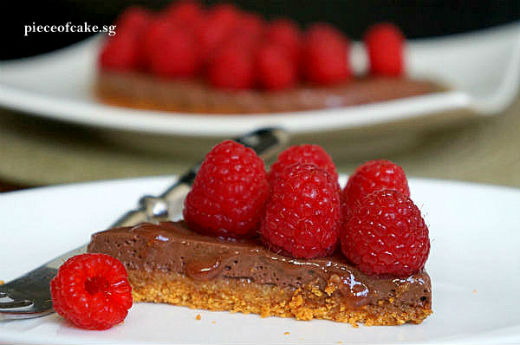 Some bloggers who have tried the recipe commented that Pierre Hermé’s crust recipe is rather crumbly so I decided to source for another pie crust recipe. Unfortunately, the others I tried were also difficult to get right. The first one was too soft and could not be moulded while the second was too hard to roll out when I took it out of the refrigerator. I almost gave up when I finally discovered a very simple almond crust base that actually stayed in shape. 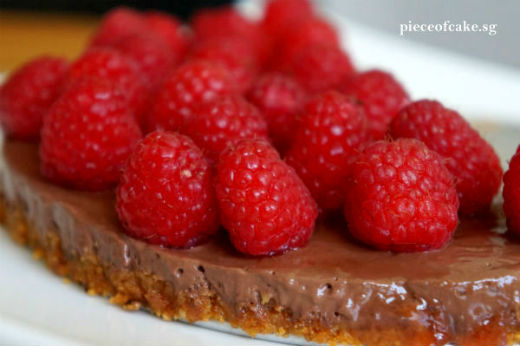 Instead of chocolate ganache, I filled the tart with my healthier chocolate tofu mousse. The tart was indeed delicious – the fragrant almond crust base, rich chocolate mousse and raspberry jam went wonderfully well together. Topped with the luscious raspberries, it is a dessert I would be proud to serve at a dinner party. The best part is, it’s a healthier dessert so I can eat all I want. 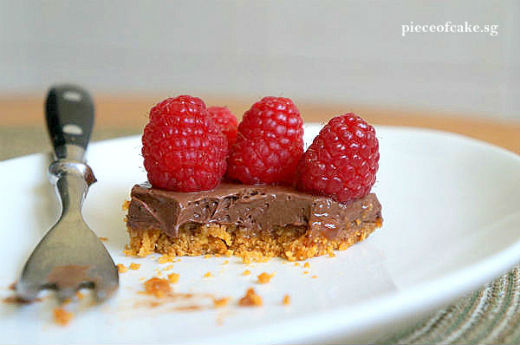 Chocolate Raspberry Linzer Tart (7 inch tart)
1. Tart base (Recipe from here)
Ingredients
Method
2. Chocolate Filling (using the Chocolate Tofu Mousse recipe)
Ingredients
Method
3. Jam Filling
To Assemble: Spread a thin layer of jam onto the almond crust base. Pour the prepared chocolate mousse over the jam layer spreading it out well till it reaches the edges of the tin. Refrigerate  for about 4 hours till it is well set. Spread another thin layer of jam mixture over the chocolate mousse and top with raspberries.
Note: When left overnight in the refrigerator, the pie crust was slightly softened.