A Tes Leches Cake, or pastel de tres leches (from Spanish, "three milks cake"), is a sponge cake soaked in three kinds of milk: evaporated milk, condensed milk, and heavy cream/whole milk. This is the first time I have heard of this cake and I was fascinated by the idea of soaking the cake in milk. I imagined that the cake would be really delicious with the flavours of the different types of milk (especially condensed milk!). 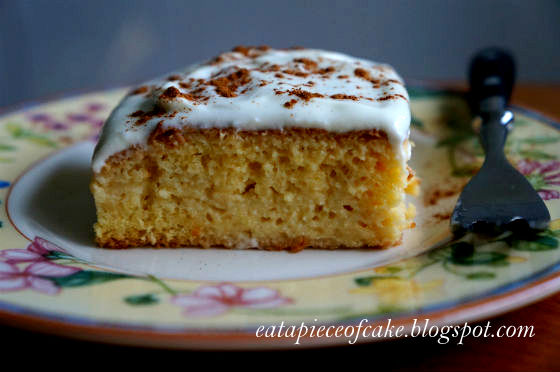 However, being health conscious, I was worried about the calories so I I cut down the amount of milk for soaking to reduced the damage to my waist line and also not to waste the milk mixture as there would be quite a fair amount of left over if I followed the recipe exactly. The sponge cake on its own was light and airy but not much to rave about. The magic really begins with the milk "disappearing" into the fork holes I made on the cake. 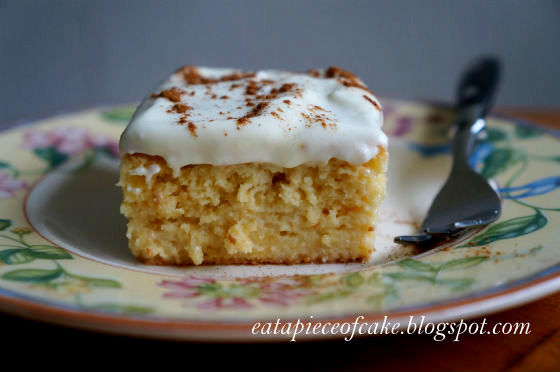 Reviews have said that this cake is highly addictive and there is absolutely no doubt about that. The soaked sponge is moist but not quite as soggy as one might expect (I was honestly expecting the cake to fall apart with all that liquid). Later, I read that because the Tres Leches sponge is a very light cake, with many air bubbles, it does not have a soggy consistency, despite being soaked in the milk mixture. The three types of milk gave the cake a wonderfully rich and creamy bite and when topped with the fresh cream, was so delicious, I couldn't help but wolfed down two pieces right away. 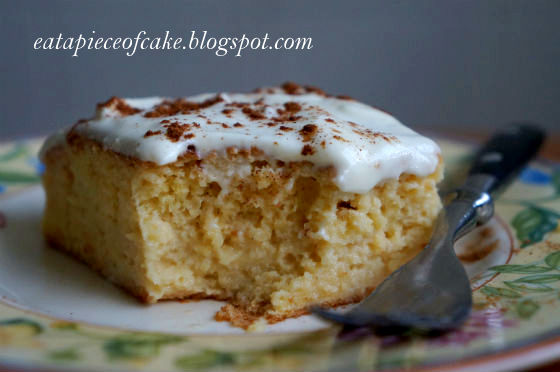 For the Cake:
For Soaking the Cake*:
*I only used about 2/3 cup of Evaporated Milk, 2/3 cup of condensed milk and 1 tbsp of milk as I read from the steps below that there will a fair amount of left over milk mixture and I did not want to waste the mixture.

Method
I am submitting this to Bake-Along hosted by Joyce of Kitchen Flavours, Lena of Her Frozen Wings and Zoe of Bake for Happy Kids