The past weekend had been a cupcake weekend - because I was baking batch after batch of cupcakes because most of them turned out less than desired. There were two reasons for doing so - firstly I was looking for a cupcake recipe for my daughter's birthday party in school and also so that I could make some cupcakes for the Bake Along's second anniversary.

Bake Along is a bi-monthly blog hop hosted by Joyce of Kitchen Flavours, Lena of Her Frozen Wings and Zoe of Bake for Happy Kids. I remember starting out in blogging at around the time of Bake Along's first anniversary and can't believe how quickly time has gone by! 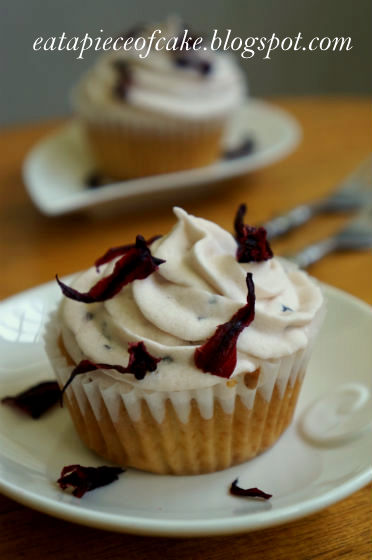 Back to my cupcake saga, after batches of deflated green tea cupcakes and chocolate cupcakes which were too dry because I forgot to add the oil, I finally decided to fall back on my favourite vanilla cupcake recipe but with a slightly different twist. I remember Ann from Anncoo Journal making these Roselle cupcakes recently and I thought it would be a great idea to use Roselle in my cupcakes and also make a Roselle buttercream to go along.

I was feeling fairly discouraged after so many failed attempts at cupcake baking and started to wonder if its my baking skills or the recipe or if its simply not my day to bake! I held my breath as I watched these cupcakes rise in the oven. I heaved a sign of relief when I broke open one of the cupcakes to check. It was the moist and fluffy cupcake I know this recipe produces - this recipe has never failed me. 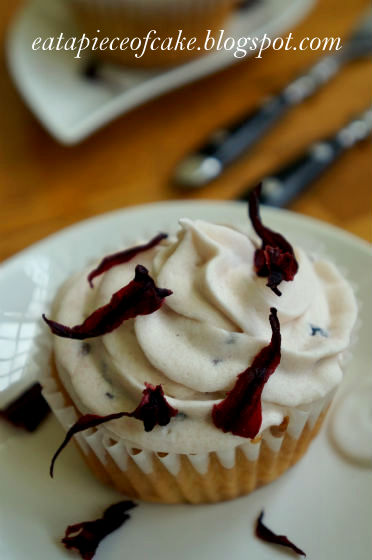 Anyway, here's just a little introduction to Roselle for those who have never heard of it. This is quite popular among Chinese, we called this 洛神花/玫瑰茄. Roselle is also known as Hibiscus Sabdariffa -a species of Hibiscus. Among the other health benefits of Roselle are its ability to lower blood sugar and cholesterol, prevent dental decay, slow down premature aging, prevent joint inflammation, improve concentration, reduce the risk of a stroke, stabilise blood pressure and reduce the risk of heart attack and cancer growth. Usually the Roselle is normally taken as a tea/drink or in jams, so I thought it would be interesting to try using it in cakes.  In this recipe, I'm using dried Roselle flowers seen in the picture below which must be soaked ahead. However, you can also use pickled Roselle flowers. 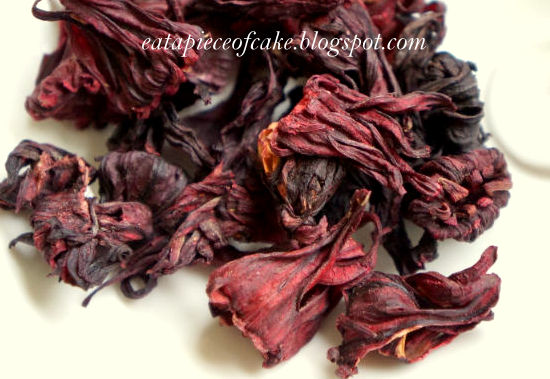 The Roselle pieces in the cupcake tasted like pieces of dried fruit - the taste wasn't obvious in the cake but they added pretty red specks to the cake. However, the buttercream had a light aroma of the Roselle flowers. I would be better if there was Roselle essence to give the cupcake a stronger Roselle flavours but I don't think that exists. The Roselle flowers that topped the cupcake looked like rose petals and looked really pretty. However, I'm quite happy with my improvised Roselle cupcake! 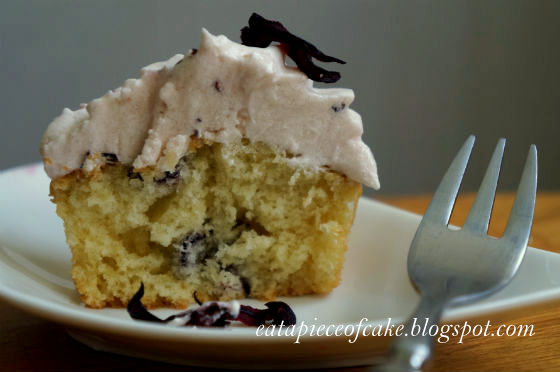