The wonderful thing about taking part in the Bake Along is that you venture into exploring recipes that you would not normally even try.  Bake-Along #26 hosted by Joyce of Kitchen Flavours, Lena of Frozen Wings and Zoe of Bake for Happy Kids is doing the Pear and maple Crumble (Bon Appetit Desserts, pg 409) this round. The only crumble I know is the apple crumble. Because I am not a fan of apple pie (which the apple crumble reminds me of), I have never considered trying it out. The idea of a pear crumble sounds much better as I really like baked pears. 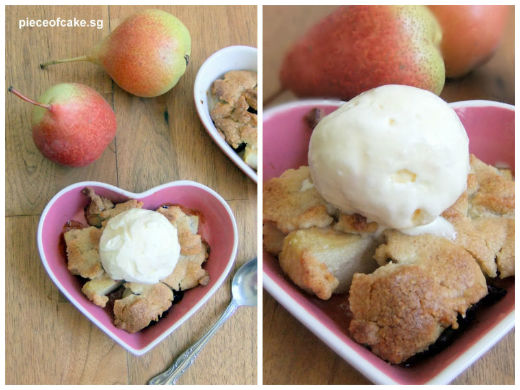 This recipe is easy to do and delicious, especially with a scope of your favourite ice cream. The crumble topping, which uses nuts, is fragrant and crunchy while the softened pears and raisins are steeped in a lovely maple fragrance. The best part is eating the ice cream together with crumple and pear. Each mouthful is a delectable mix of textures – the cold ice cream contrasts well with the warmed pears, crunchy crumble and slightly chewy raisins.  I only have one word for it: heavenly! 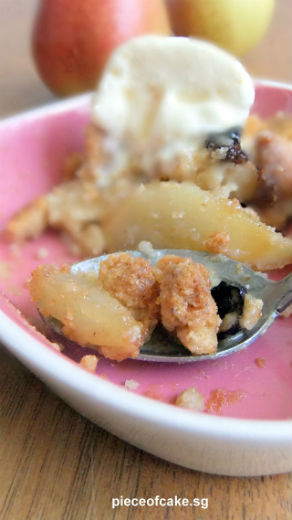 A side note about the nuts: I grounded them till they were really fine so that the kids cannot pick them out

The grounded nuts produces a more biscuit-like topping rather than a crumb-like texture which is still as crunchy after baking. If you like larger crumbs for the topping, do not over chop the nuts. The original recipe produces a huge portion so I cut it down  so that its just enough for myself and the kids.
Pear and maple crumble (2 servings) – full recipe here
For topping
For pears
Make topping: Combine all ingredients in processor. Process until nuts are coarsely chopped and small moist clumps form. Transfer topping to medium bowl. Cover and refrigerate until firm, about 1 hour.
Make pears: Position rack in center of oven and preheat to 175°C. Toss all ingredients except sour cream in large bowl to blend. Let stand 15 minutes. Transfer pear mixture to baking dish. Sprinkle topping over pears. Bake until pears are tender, juices bubble thickly and topping is golden and crisp, about 30 minutes. Let stand at least 10 minutes. Serve warm with a scoop of ice cream.
Posted by Unknown at 13:24